If you are lucky, you might get a spare minute in the morning to grab your favorite cup of coffee from Starbucks.

Similarly, if you have a minute, you can quickly type that email response that has been pending for a long time.

No matter how negligible a single minute might be for us, it can be extraordinary in a lot of situations.

People who are indulged in a life and death situation, count each second, making a minute longer and much more noticeable than it is.

But have you ever visualized 1 internet minute? 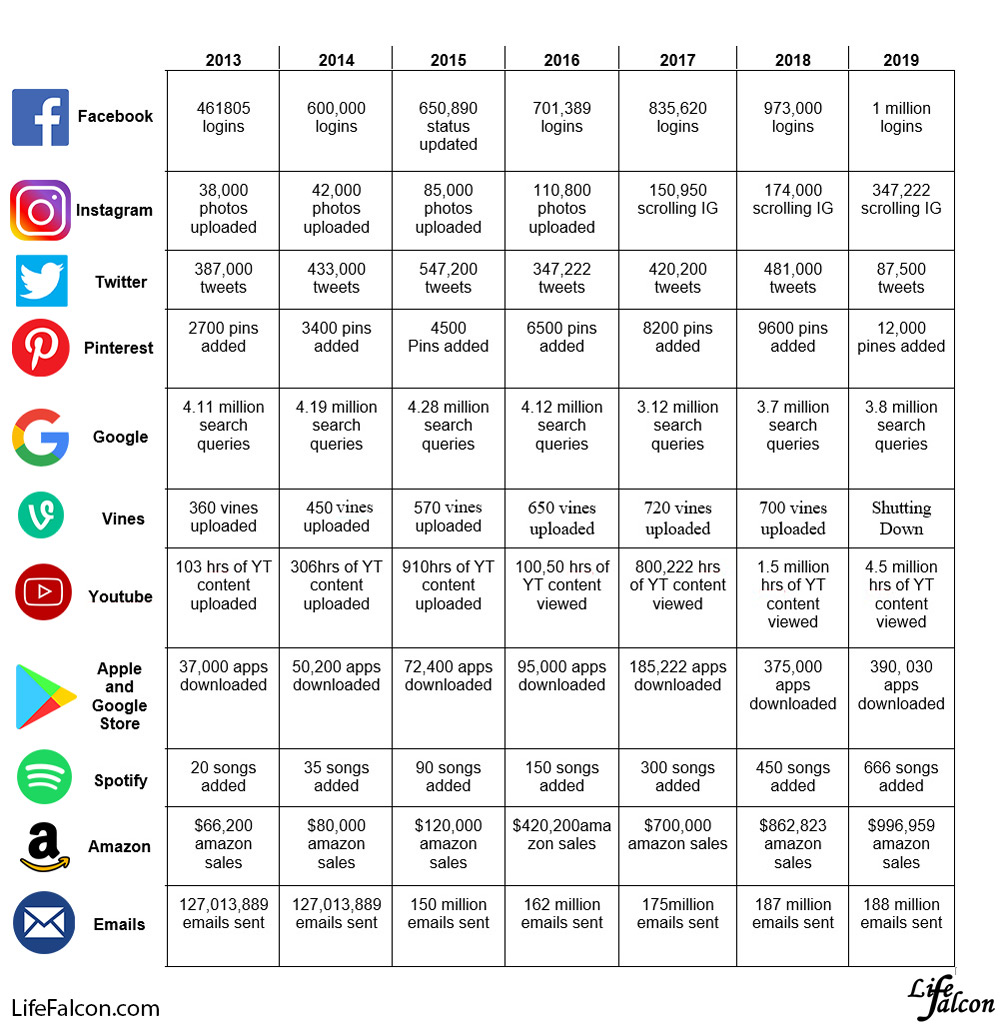 Did you know, almost 188 million emails are sent in 1 minute in the internet world, around the globe?

You simply cannot imagine what happens every second on the internet; it is packed with action!

The online population sums up to 3.2 billion people, on a daily basis. The stats for what happens in 1 minute on the internet are mind-blowing.

We have summed up the stats for some of the most famous websites right here.

Have you ever thought about the number of online viewers on Youtube every minute? Well, we will surprise you with the one-minute activity that takes place on these websites.

Last year, 18 million messages were sent via the internet in 1 minute and today, around 18.1 million texts are sent.

In 1 minute on the internet, 4.3 million videos were viewed in 2018. A year later, the videos watched per minute have risen to 4.5 million.

The stats have risen significantly for Instagram with a year. This has been one of the most trending social media apps and is growing massively over time. In 2018, 174,000 people were scrolling through the IG feed in 1 minute.

Today, in 2019, the population on Instagram, per minute has risen to 347,222 people. It clearly shows the immense growth that IG is going through at the moment.

Twitter has seen a downfall in its population over time. Last year, the one-minute activity of Twitter was far better than this year. It has gone down the slope.

In 2018, Snapchat was still trending and people did not find it boring. But this is another platform that is declining in terms of users.

Although the number of users per minute has not fallen as significantly as they have for Twitter; but they have not risen either. 2.4 million snaps were created per minute in 2018.

This year, the number of snaps has fallen to 2.1 million.

Surprisingly, the population using Tinder per minute has grown significantly. In 2018, 1.1 million swipes took place on Tinder, per minute. This year, the number of swipes has risen to 1.4 million in 1 minute.

Online shopping has grown significantly over time. People prefer shopping on the internet much more these days.

In 2018, the one-minute activity of shopping was huge.

This year, it has grown yet again. $996,956 is spent in 1 minute on the internet by online shoppers.

Now, this is a huge amount of money that is being spent, merely within 60 seconds.

This year, around 390,030 apps are downloaded in a one-minute activity.

These stats are both for Google Play Store and Apple Store.

Netflix is one of the most-watched and visited websites on the internet.

Last year, 266,000 people were online on Netflix per minute, watching movies or serials for straight a minute.

This showcases the interest people have developed in smart devices within a year.

It also portrays the fact that these gadgets will gradually grow over time.

It is clear that platforms like Instagram and Netflix are flourishing incredibly well. They are growing at a wonderful pace.

Netflix is one of the best entertainment platforms which is why it is also growing at a stagnant place.

Now imagine, what would these stats be like in 2020?

How many total websites are on the internet?

Have you ever asked yourself about how many total websites are on the internet at the moment?

There are over 1.5 billion websites on the internet at this very moment and they keep growing over time.

However, less than 200 million of these entire websites are actually active and running. 1 billion websites milestone was covered in 2014.

Since then, the number of active websites has fallen below the stated level or has reached back to 1 billion. The growth and decline have been going up and down.

What will happen on the internet minute 2020?

Every year, the population of the internet world keeps growing. People are gaining access to the internet in various parts of the world. Where some websites are growing at a wonderful pace, some are shrinking too.

On the other hand, Instagram and Netflix have spiked up their number of users amazingly.

Likewise, we can see a huge decline in the users of Twitter too.

So what will happen next year? What will be happening in 1 minute in the internet world? What will be the one-minute activity on these various famous websites?

Well, 2020 is going to have a significant change in the number of users per minute on each website.

Just like this year has seen a massive rise and decline in the users; 2020 will see something completely different.

One minute on the internet is magnificent than the 1 minute in your life.

You might neglect a minute in your life but when you see inside in the 1 minute in the internet world, you will realize that there is a lot going on.